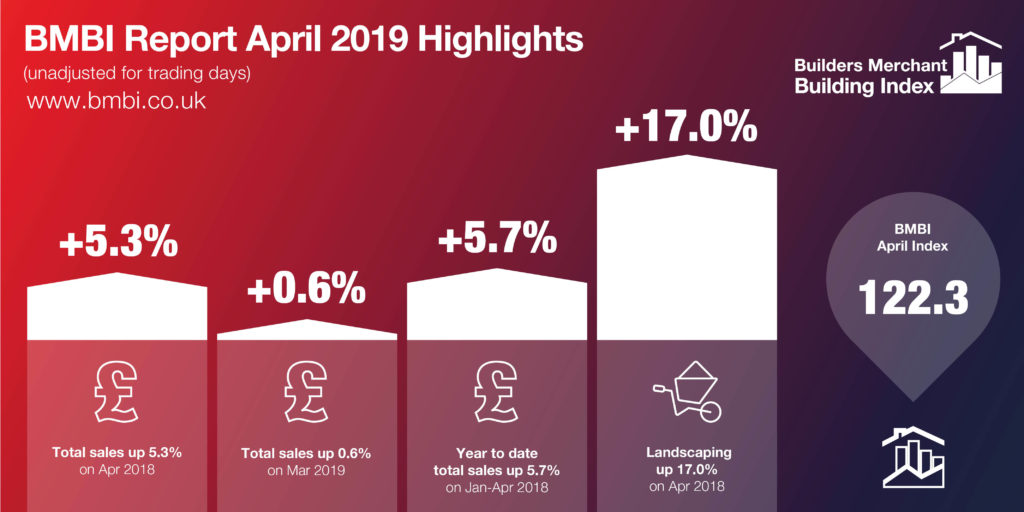 Year on year
Total Builders Merchants value sales in April 2019 were up 5.3% compared with the same period in 2018. Having seen strong growth in both February and March, sales in the seasonable Landscaping category continued to improve in April and were up 17% compared to last year, as the weather stayed drier than usual. Timber & Joinery Products and Heavy Building Materials performed well, with sales growth of 5.5% and 4.5% respectively.

Month on month
Total Builders Merchants sales were up 0.6% compared with the previous month, though all categories except Landscaping and Services saw sales decrease in April. However, the adjusted April 2019 figures, which take into account the trading day difference, show that total sales increased 5.6% over March.

Index
April’s BMBI index was 122.3, with Landscaping the highest category at 154.5, but most other sectors, with the exception of ironmongery, were below the Total Builders Merchants index. The average sales a day index for April was 126.9.

Produced by MRA Marketing, the Builders Merchant Building Index report contains data from GfK’s Builders Merchants Panel, which analyses data from over 80 of generalist builders’ merchants’ sales throughout Great Britain. The full report with index tables and charts is available to download at www.bmbi.co.uk/.

BMBI, Construction Insight, Industry News
You may also like
The Pulse: Strong expectations for the next 6 months
2022 off to a good start as BMBI reports strong January sales
The Pulse: A good start to the year for Merchants
Slowing Q4 sales but third-best quarter in a record-breaking year
About Post Author